Young kids with cell phones: Really? Is it necessary? 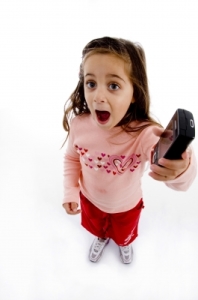 Let’s put aside the debate on the impact of too much screen time on children. You’ve decided you were going to buy your child a cell phone. She /he’s. 9? 10? Hidden under the guise that it will be useful in case of an emergency. What happened to regular phones? Using the school phone? Another family’s phone? Let’s not go there.

When I asked one of my little clients, a tween, to call her friend when she felt bad as a way of coping. She told me she could not use the minutes on her cell phone. Then I proposed ” why don’t you use your home phone?” She replied that she couldn’t. “Because your mom is on the phone when you need it? ” I replied. She quickly answered that her friend wouldn’t pick up as she would not recognize the number. So I recommended that she text her friend first to warn her to pick up as she’d call from her home phone. She looked at me, and then laughed ” we don’t really talk on the phone, we text”. This is not my first tween or teen to give me the look as if I were beamed on earth from outer space and dare propose they connect between friends over the phone instead of over texts. What a concept to actually speak live. Pushed to the extreme, it’s not uncommon to see young people, in the same room, text to each other instead of speaking to each other. That’s another post. I won’t even go there for now.

Although kids owning expensive smart phones are almost the norm, they really have no idea how to connect with each other by actually talking LOL!

So herein lies the $1 million dollar question. If you’re going to waste $600-700 on a smart phone that will not be used as such , why not just give them an iPod touch and save $500 and even more by saving on costly monthly plans?

My iPod touch is literally the first generation one. I can face time, use email, internet, free text and free calls ( the App Majic Jack) etc. The only thing it doesn’t do is take pictures. Most kids have iPhones anyways, so between Apple products they get to do everything a smart phone does, without the costly investment…. And now, there is WiFi every where or you can borrow someone’s signal in case of an emergency.

Putting aside the issue of saving tons of cash. What are you teaching your kids about the value of things. I have to think twice before I get the newest generation iPhone since my 4S is working perfectly fine. What good reason do I have to justify the replacement and the cost, and polluting the environment with yet another piece of electronic that will fill our landfills? Not to mention that I refuse to be a locked into a two year plan, and be a slave of crazy cell costs that keep rising and I have no choice to switch.

Kids are a lot safer today than we were… Everyone has a cell phone, there is always someone hovering over them. Why can’t parents delay giving a cell phone? Or is it to appease their own anxious minds? Their tendency to hover because of their fears or controlling tendencies? They can’t handle the tantrum that will ensue if they say no? They are scared their kids will be bullied if they don’t have the latest cell phone like most, and dare to be different? Most these choices are fear based, and really is it justified? I think not.

If more parents stood up for their beliefs and weren’t so scared to stand out from the norm, which by the way is not a healthy norm, they would teach vicariously their own kids to stand up for themselves. Kids learn by imitation, not by being lectured to. If your words say one thing yet your actions contradict them, rest assured that your kids will follow your actions!

So before you reach out to get that $700 iPhone, while you’re stuck with a cheap flip phone, go to the next counter at the Apple store and get an iPod touch. It will do the job just fine and more! And there you go, you might have saved enough money to buy one or two plane tickets to Disney World, which trust me, will leave you and your kids with a lifetime worth of memories and awesome bonding… And leave those phones on the table while you’re at it, be with your kids and play! Have fun!

Simply fill out your name and email to gain instant access to my free guide!